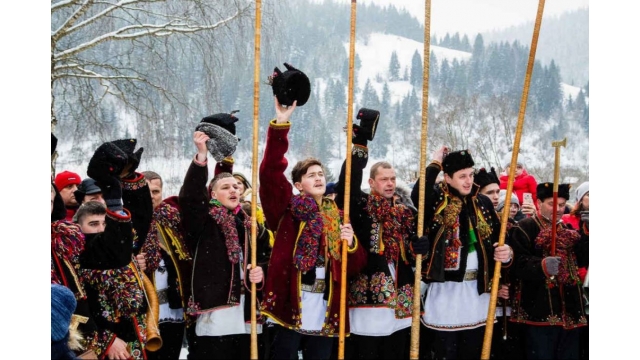 “On Sunday morning, an early sunrise brought joy and glory to cherry gardens” — these lines begin a carol which has been heard in the village of Kryvorivnia in the Hutsul region for over 100 years. The tradition of Koliada (carolling — tr.) has been a part of the winter holidays since the pre-Christian times, and it has continued until today, uninterrupted. Neither adoption of Christianity nor the Soviet bans could break this lasting tradition: the singing of men and the ritual of Koliada in this village in the heart of the Carpathian Mountains.

In the old times, the carollers represented the spirits of the ancestors. Back then, Koliada was a celebration of the birth of the sun. Later, the archaic and the Christian culture intertwined, and Koliada turned from pagan to Christian, which means the birth of the sun and the birth of baby Jesus merged. Then, the priests started composing new carols together with the Hutsuls. Koliada is considered to reproduce the model of the church: it even starts in the churchyard. The carollers made it possible for the church to visit every single house: not only those in the valley by the river, but also the ones scattered high in the mountains.

Koliada is also the time for getting together and communicating, sharing thoughts and worries, especially for those who can’t meet each other often during wintertime.

Besides the carollers themselves, Father Ivan Rybaruk, the local priest, cherishes the rite. At Christmas, he blesses the carollers. Then, he is in charge of distributing the money collected while carolling: for the renovation of the church, for the needs of the Armed Forces of Ukraine in the military action in the east of the country, and for people who need medical treatment.

“– We don’t merely sing the carols from the past, from 100 years ago, but we also sing about the present. Carols represent what we’re living in, and that’s why they were preserved.”

Father says he wishes every village in the Hutsul region would be like Kryvorivnia, where each hamlet or part of the village has its own company of carollers:

Kryvorivnia has nine hamlets and thus nine companies of carollers. Now, in a time of war, one party always goes caroling to the east of the country, to the soldiers.

Kryvorivnia is considered both the summer and the winter capital of the Hutsul region. Ivan Franko, a Ukrainian writer, and Mykhailo Hrushevskyi, a Ukrainian academician and political leader, came to Kryvorivnia for their holidays. Here Serhii Paradzhanov shot his legendary film Shadows of Forgotten Ancestors. Many creative people always came here, and this exchange affected the place by turning it into a cultural heart throbbing with energy. To add beauty in their life, Hutsuls often use decorations with no practical purpose in their woodcarving or clothes. Ivan Rybaruk explains:

“– Living in the mountains, amid this beauty we have, we can’t be different. Besides, we (Hutsuls — ed.) love freedom, we never gave up to foreign cultures or foreign authorities, but we simply lived our own life. And this desire to live our own life has let us stay the way we are. Having time to meditate, people come to understanding what’s true.”

At Christmas, the carollers gather in the churchyard. The trembita players prepare their instruments (trembita is similar to alpine horn — tr.), which lay idle for a while, by moistening them with horilka (a Ukrainian strong spirit — tr.). Meanwhile the other carollers and the guests attend the holy service and receive the sacrament of confirmation in the church. After the service, the company of carollers, the villagers, and their guests go out to the churchyard. The carollers stand round in a circle, a universal symbol of the sun, and the ‘bereza’ men (leaders of the companies of carollers — ed.) and fiddlers line up in the middle. And then starts the rite awaited for a whole year:

On Sunday morning, an early sunrise

The cherry blossom tender and white,

Bartky (bartka is a sharp thin shepherd’s axe — ed.) rise in the air as if to beat the rhythm; horns and trembitas blow; bright colours and feathers on krysani (krysania is a Hutsul hat — ed.) gleam in the winter sun — a colourful carolling wave.

They start a carol with plyes (a dialect word for a kind of a dance — tr.), when the carollers not only sing, but also do a little dance. Plyes has been a vital part of carolling since the pagan times. It is a kind of a winter ritual dance. The carollers dance around the church, and then — near the houses, thus bringing the joy of Christmas to the houses and the people living there. In Kryvorivnia, the carollers make their dance in one spot without moving around much, while, for example, in the village of Dzembronia, which lies nearby, they walk like a military unit.

While the carollers are doing the plyes near the house, the gazda (the owner of the house — ed.) makes up his mind whether he should invite the carollers inside or not. Once they have come in, they can sing carols for four hours or even longer.